Soft and Chocolatey Raw Vegan Pie with Pears on Top

I first made this pie to share during Christmas dinner this past year and it was super delicious. When the oven, the microwave, and even your neighbor’s kitchen appliances are full, you won’t have to worry – being a raw vegan you can always make room for this dessert. This no-bake dessert called for minimal hands-on time and delivered the most satisfying flavor for chocolate lovers. The curst was made using nuts with subtle flavors like pecans and macadamia nuts tossed with dates in a food processor, similar to the crust recipe used for my key lime pie. Cashews, almonds or peanuts are also options if you’d like to switch any nuts in this recipe. The chocolate filling was made using only four essential ingredients, cacao nibs, coconut oil, almond butter and almond milk. The pie is rich and silky-soft; best when stored in a freezer to hold it’s shape. This chocolatey raw vegan pie is one of my favorite recipes to serve to loved ones, or to store when you have sweet cravings. I also enjoy the creative process of decorating the top of the pie with a layer of pear slices and a dash of cinnamon.

Anyone lucky enough to taste this decadent dessert may assume that you slaved to prepare it but it’s actually possible to make with little effort and lots of chocolatey raw vegan goodness. This pie is comforting, tasty and healthy to enjoy guilt free because it’s gluten free, paleo and did not use any dairy products: only clean ingredients that come from the earth. Often times people think of raw vegan food items that are green, such as salads, but being a raw vegan does not mean you should have to skip the dessert. Serve this chocolatey raw vegan pie during a special occasion, or just as an indulgent way of treating yo-self. 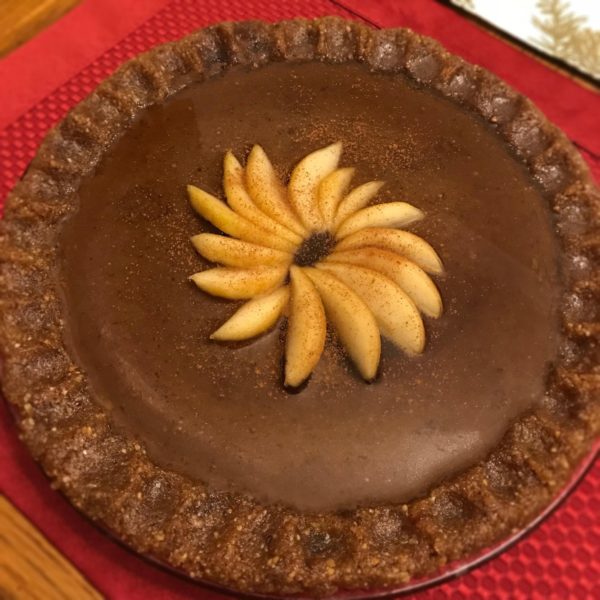 Raw Vegan Chocolate Chip Cookies Made with Oatmeal and Cashews